We make some pretty cool things. 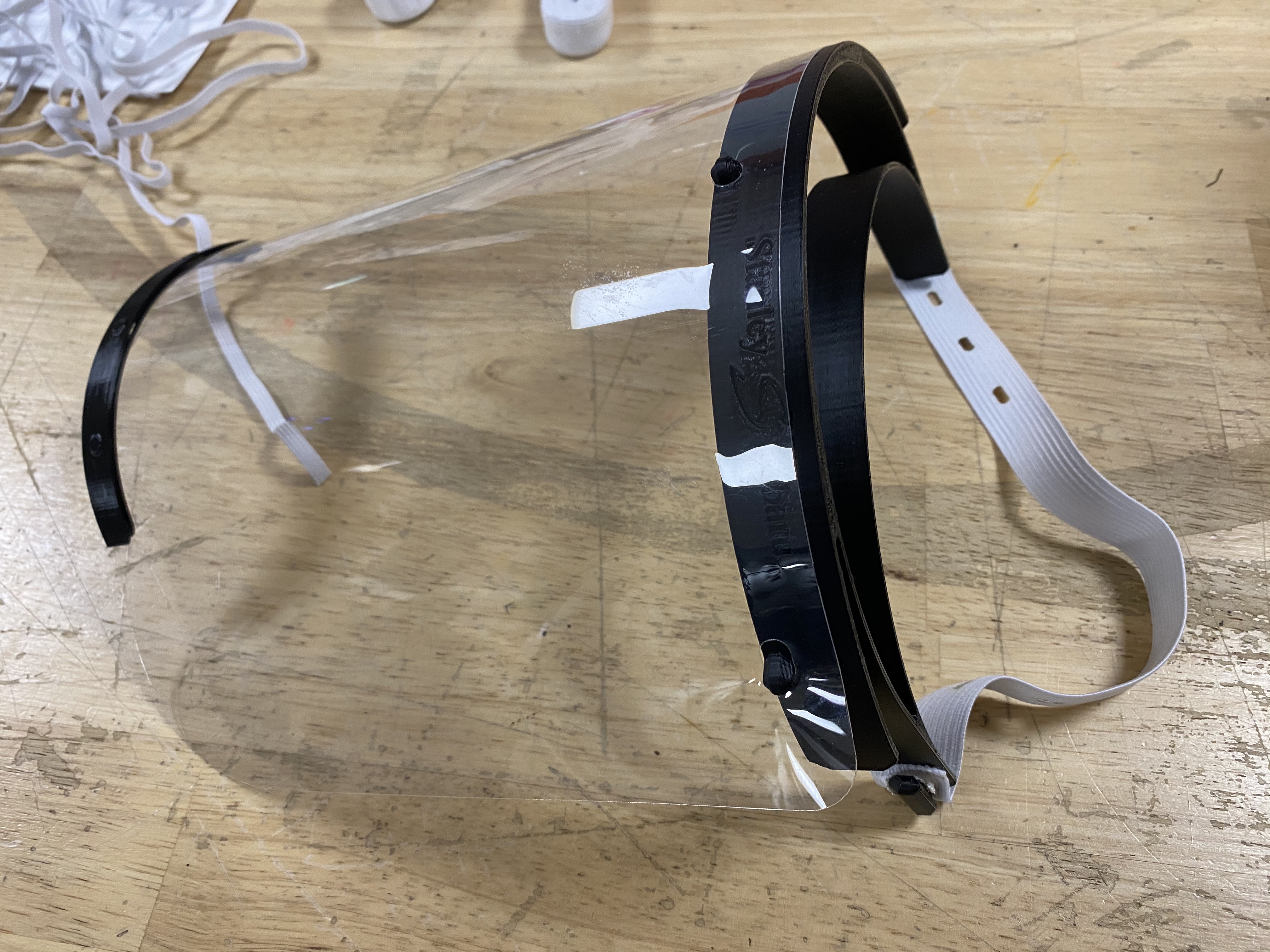 Check out our PPE page to see what we've been doing in the Idea Center to help produce much-needed PPE for our local healthcare workers. 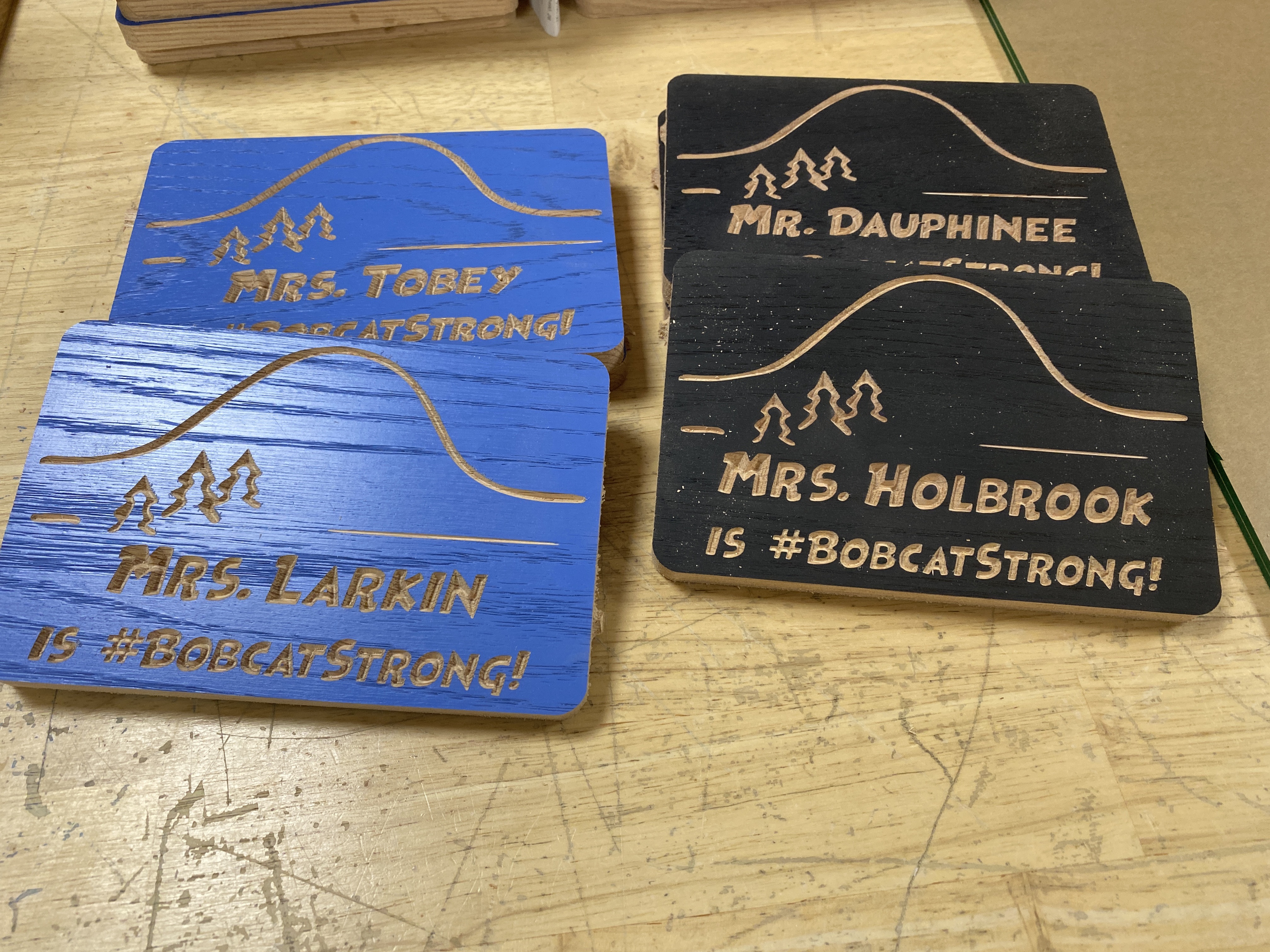 For Teacher Appreciation this year, we wanted to emphasize that our teachers are our local heroes--not just during this time of uncertainty, but always! Together we are #BobcatStrong! Mr. Jurick put together the plaque design and using the full-size CNC milling machine quickly cut out 35 plaques for our teaching staff! We used natural hard oak (which turned out amazing!) and then painted half blue and half black, our school colors. So cool to give out such high-quality customized gifts this year! 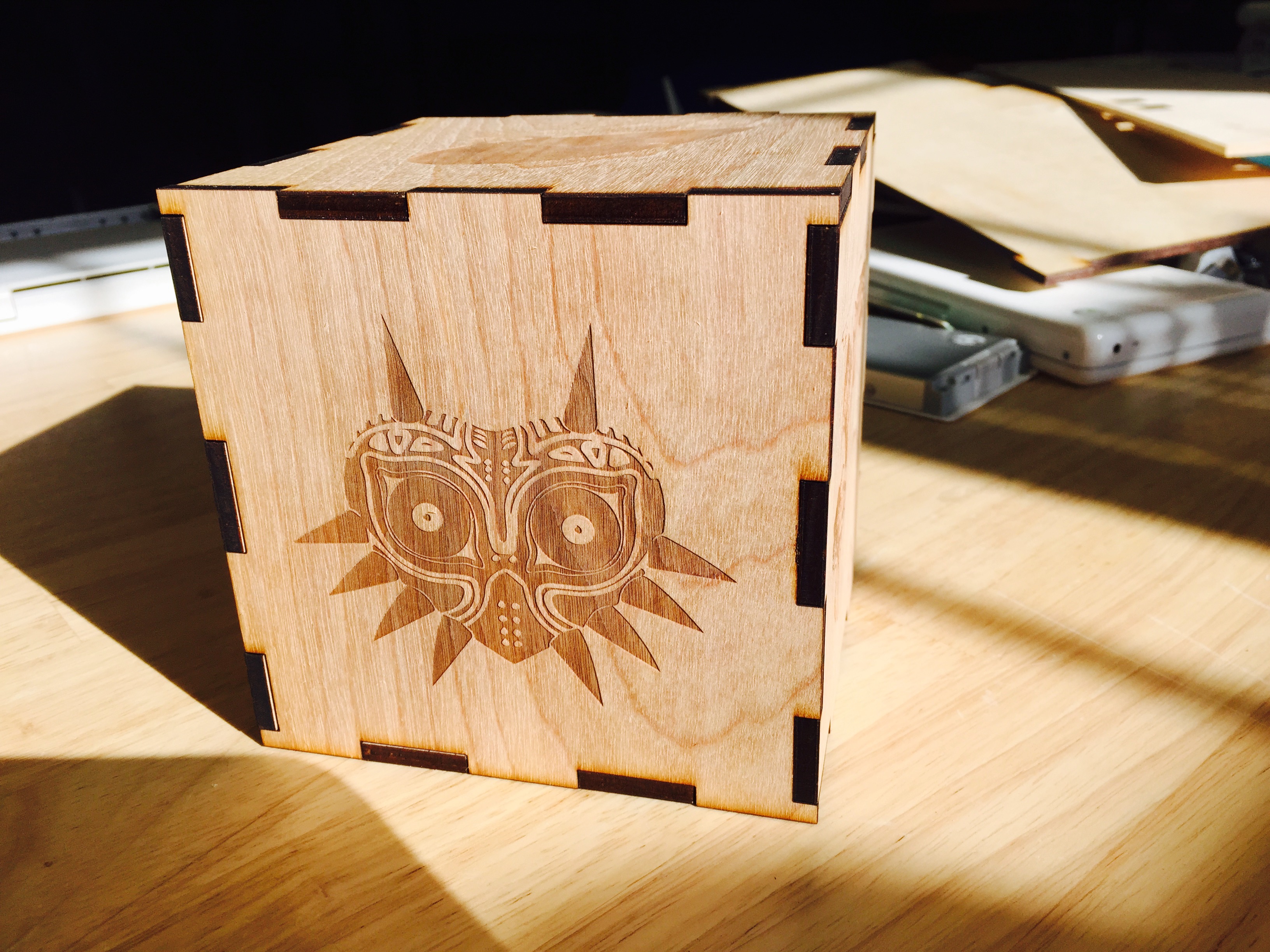 For Mr. Jurick's Idea class, we had to design 5"x5"x5" press-fit wood boxes that assembled without glue or metal hardware. I used Inkscape to design the sides of the cube and added images to each side that were burned in by the laser cutter. 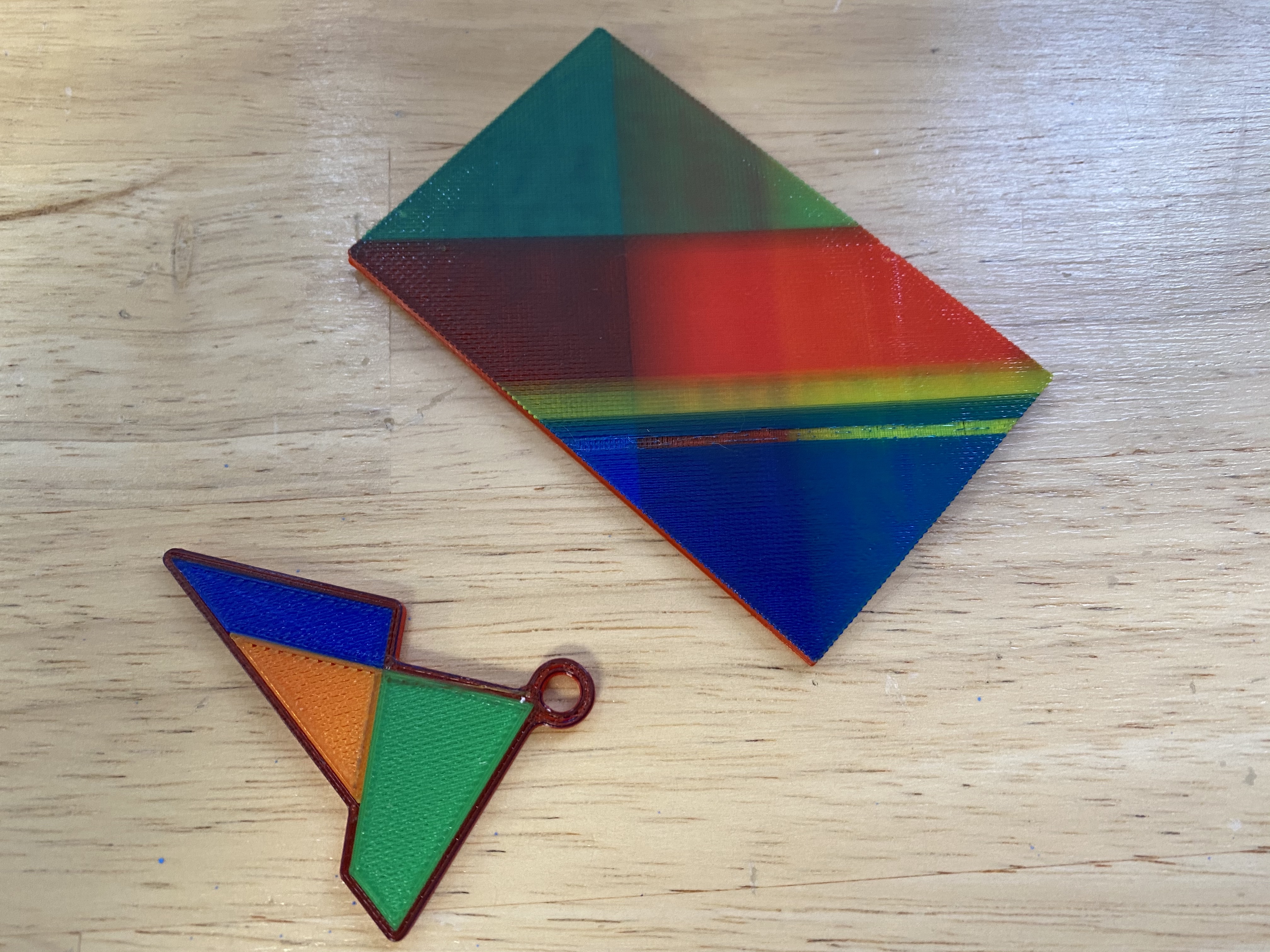 Testing the compatibility between the Palette 2S Pro and the new Dremel 3D45 printer. Used four different filaments to fabricate a pre-made design of the Mosaic logo. Turned out super cool! Now that we know our multi-filament system works so well, the question becomes, "What next?!" 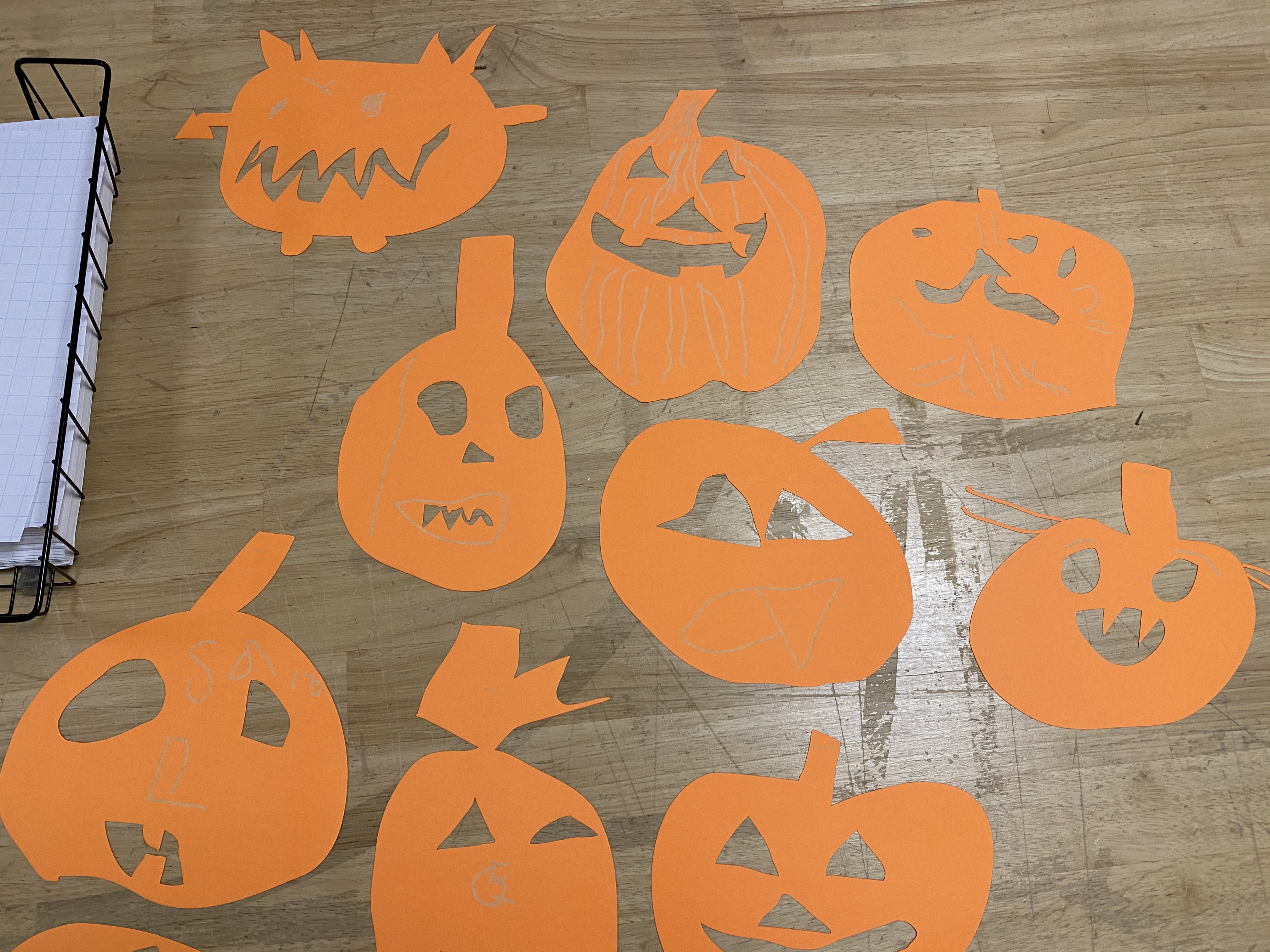 Our customary October class project in first grade is to create intricate paper jack-o-lantern cutouts using orange cardstock and the laser cutter. Students start by using Autodesk Sketchbook on their iPads to design their jack-o-lanterns and then send their designs to Mr. Jurick who lays them out in Illustrator and then to the laser cutter for the awesome light show 😎 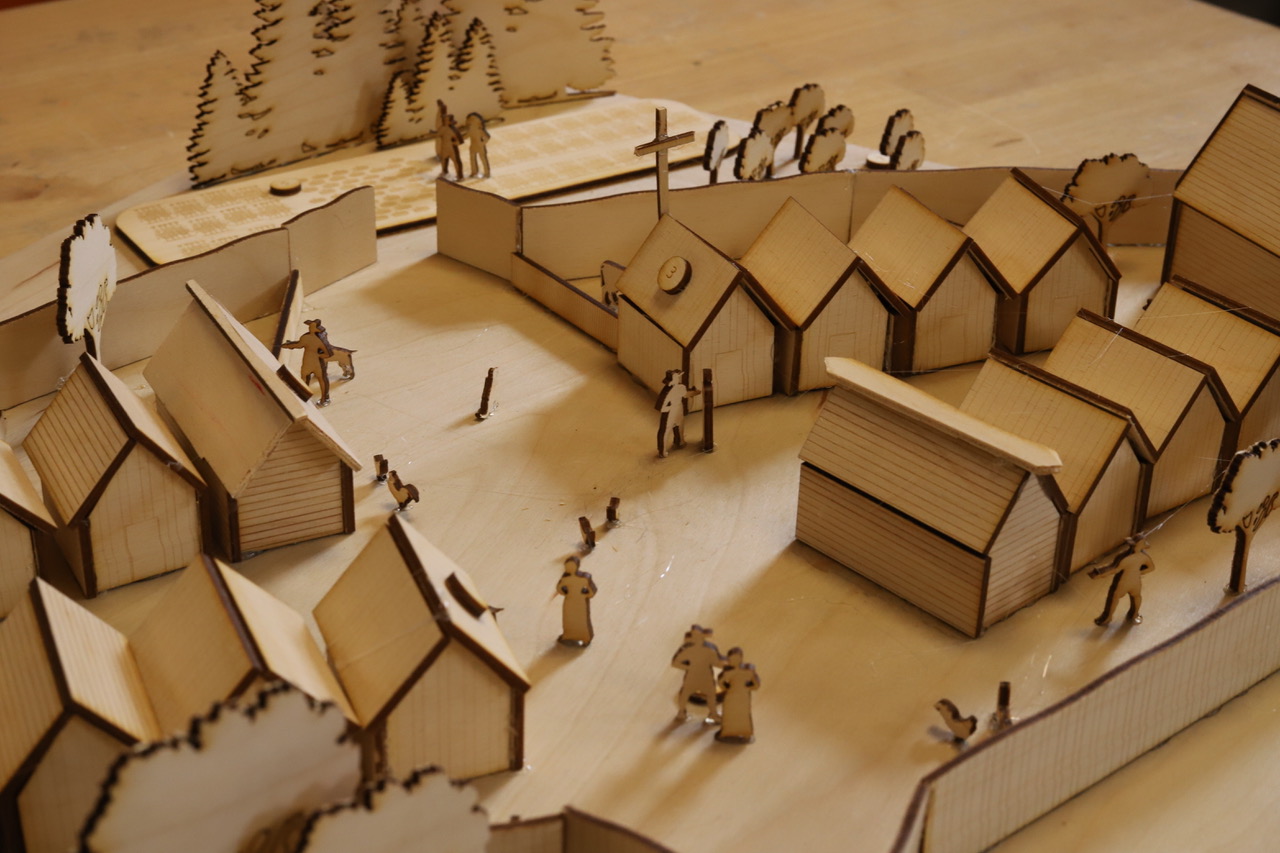 This model of Plymouth Village was made entirely in the Idea Center. We made a replica of Plymouth Village including features that the village had, such as enough houses for the roughly 40 families of Plymouth. These houses were small, simple, and sturdy. Another feature is the fort, which was Plymouth's main defense. Plymouth also contained a church where the pilgrims did their praying. The armory was where the pilgrims stored their weapons. Orchards and crops, inside and out, provided a lot of the pilgrims' food. The communal oven was where the pilgrims baked all their bread. I wanted to do this project in the Idea Center because I could complete my project but also learn something about the software at the same time. When we were choosing our size, we wanted something that was not too big but also not so small that we would be doing everything with tweezers. For making the houses, the people, and the animals, we found clipart online and then transferred the images to the software we were using. And then sent it to the machine. The laser cutter worked well to cut everything out. The steps were design, manufacture, and assemble. 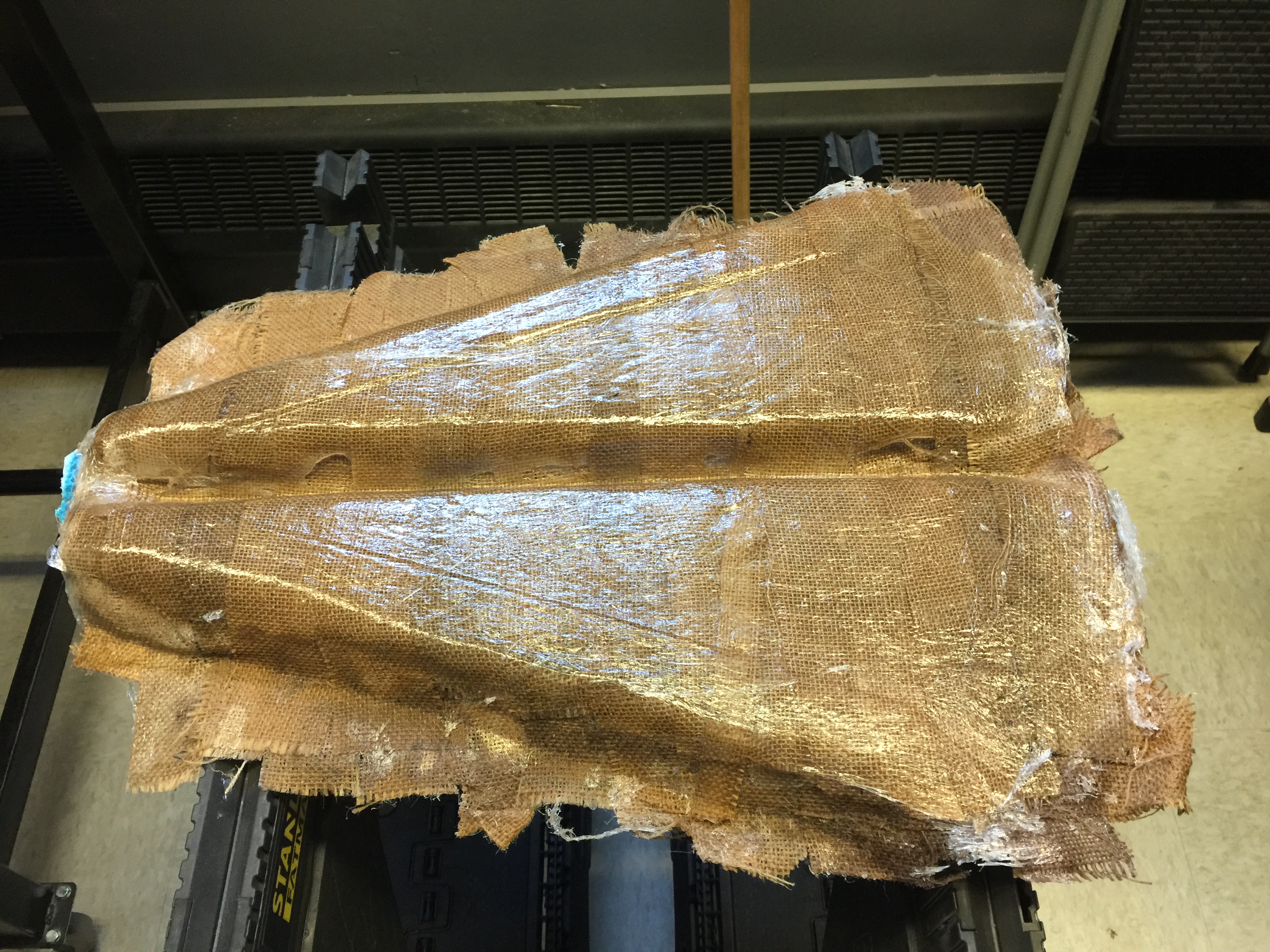 Because who doesn't love working with epoxy? 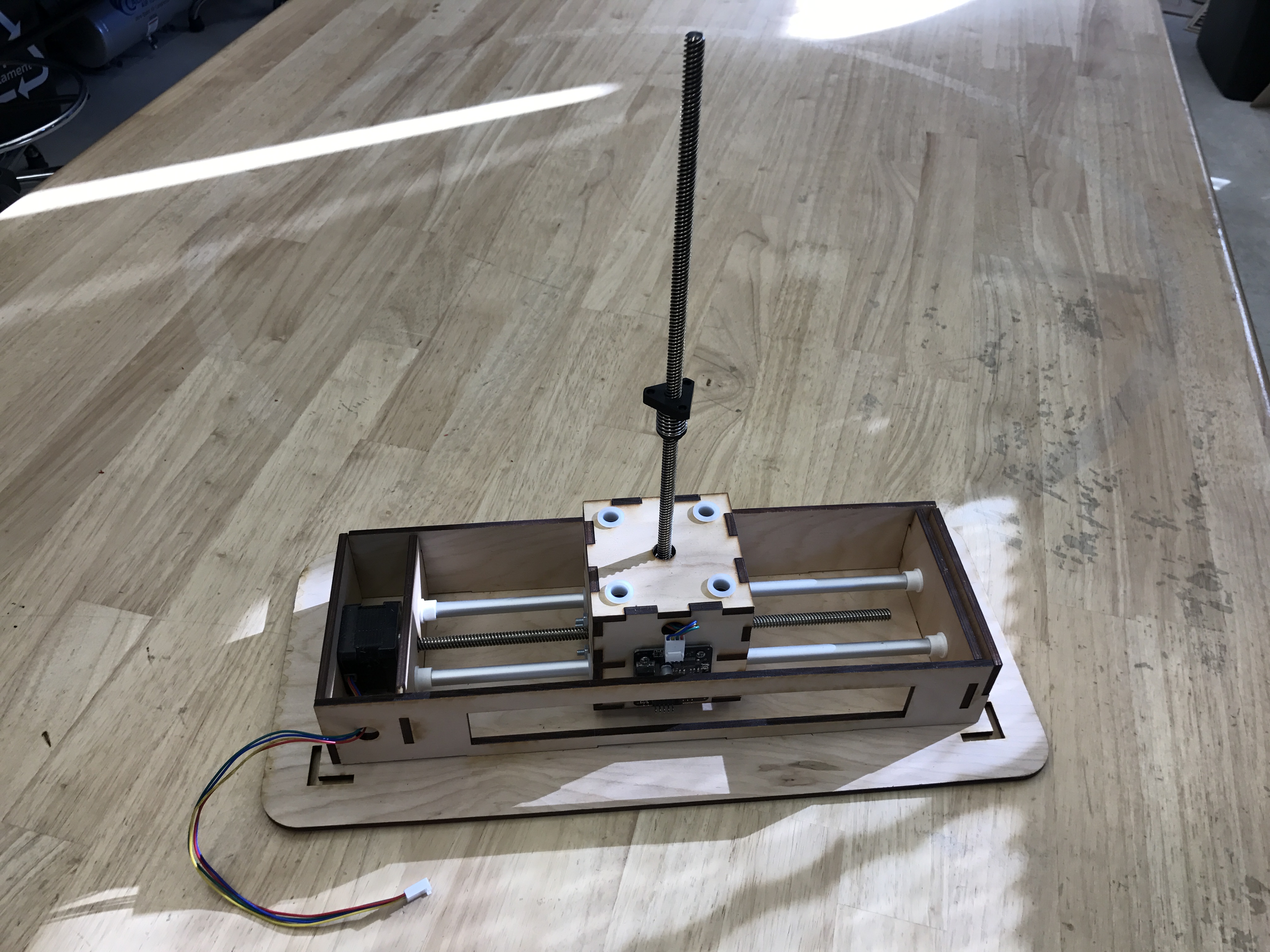 For Fab Academy, we tinkered with a couple stepper motors and some basic laser-cut plywood designs to fabricate a simple machine that moved in two axes. 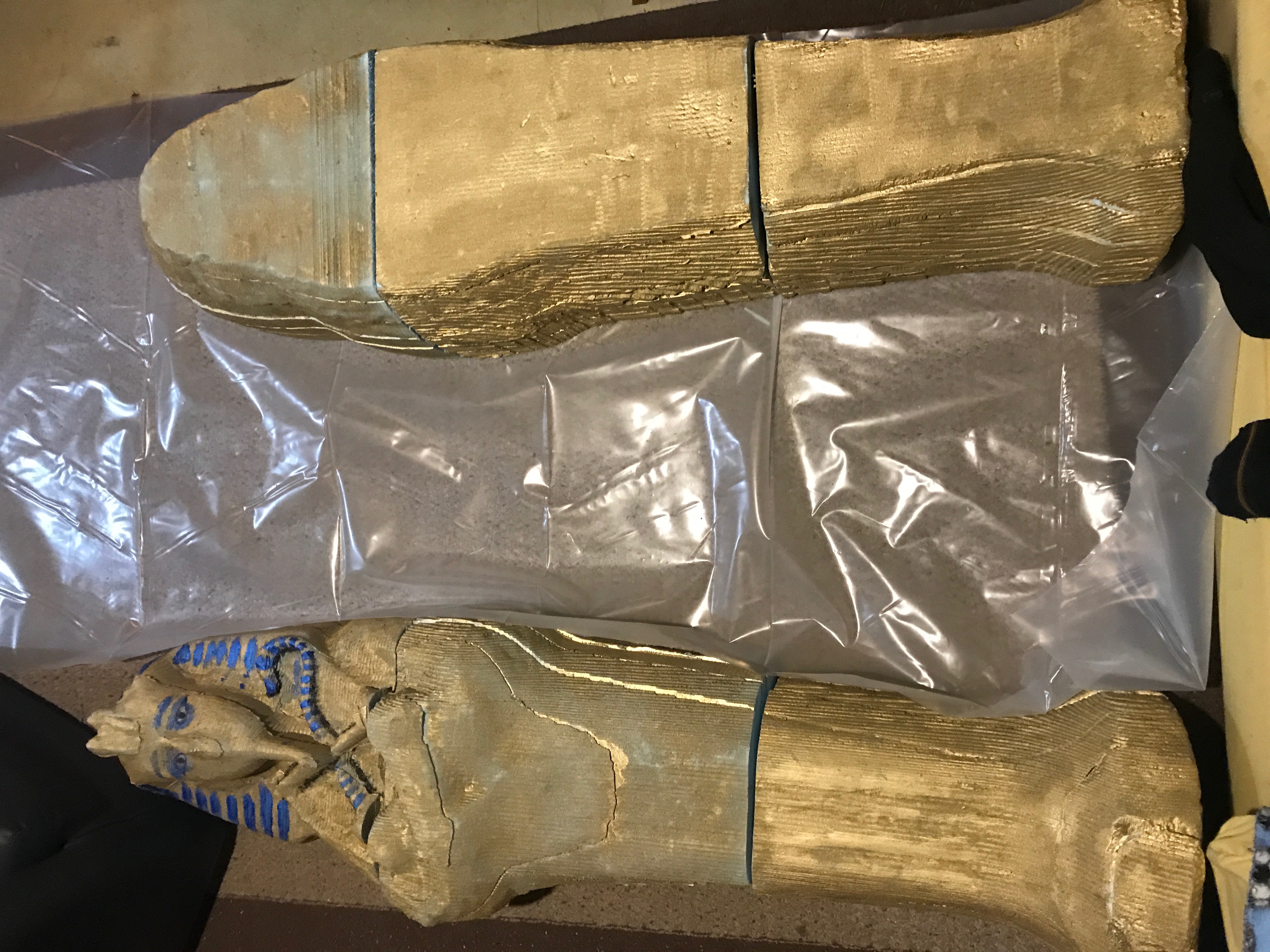 For a high school project, my partner and I had to build a historical artifact in life-size. We decided to make a sarcophagus. Using the Desktop ShopBot we milled out 18 slices of extruded polystyrene foam. Then we assembled the slices into three stacks of six slices each, then attached the three stacks, gluing everything up using contractor adhesive. When it was done we spray-painted it gold and then used blue paint for accents. 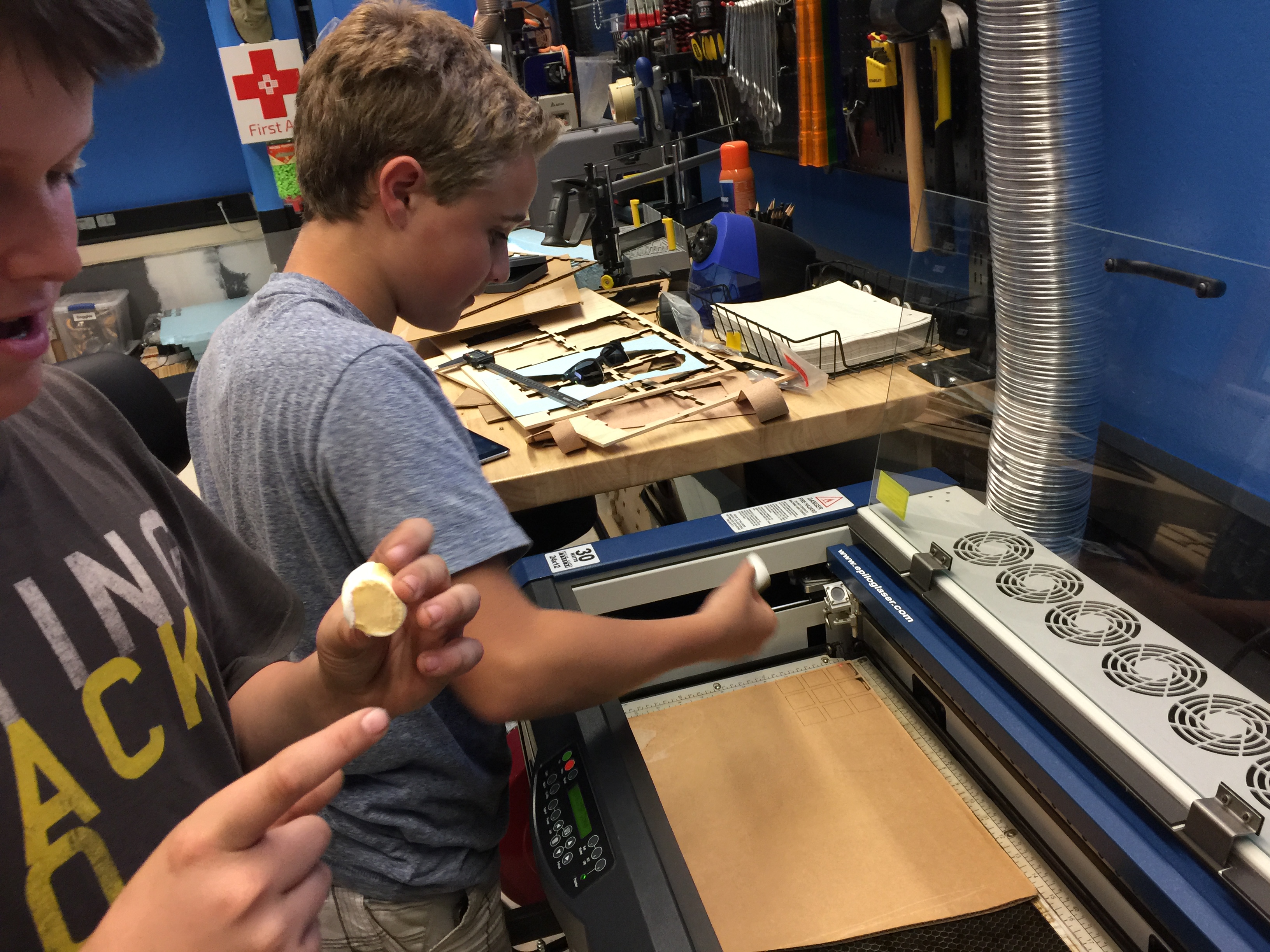 A laser cutter works by basically using fire... and we use fire to toast marshmallows... so... 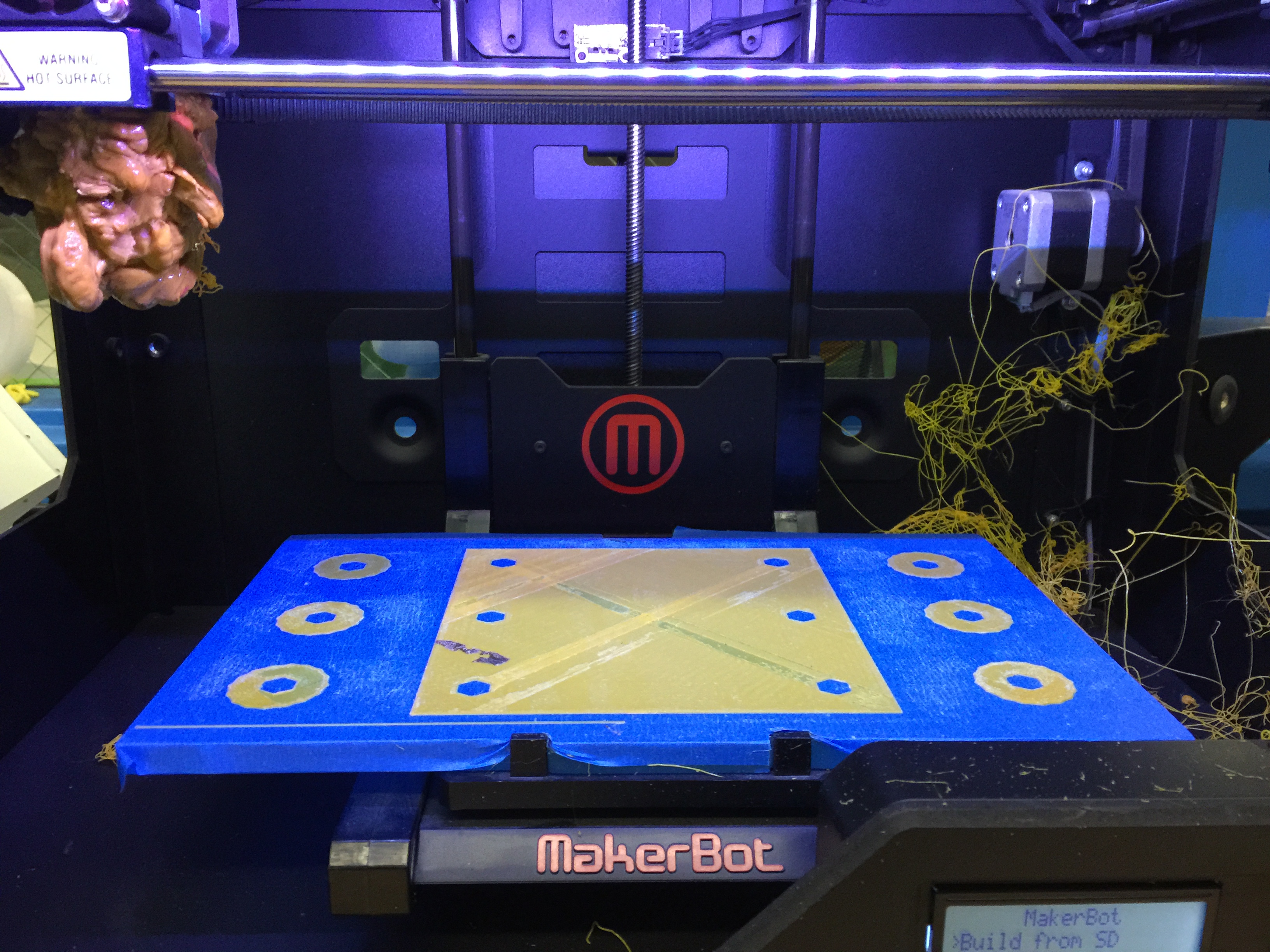 For my social studies project I wanted to 3D-print a model of the Greek Parthenon. Mr. Jurick helped me set it up and since it would take over 10 hours to print he said it would have to print over night. When he came in the next morning, he found that it didn't really turn out like we were hoping. 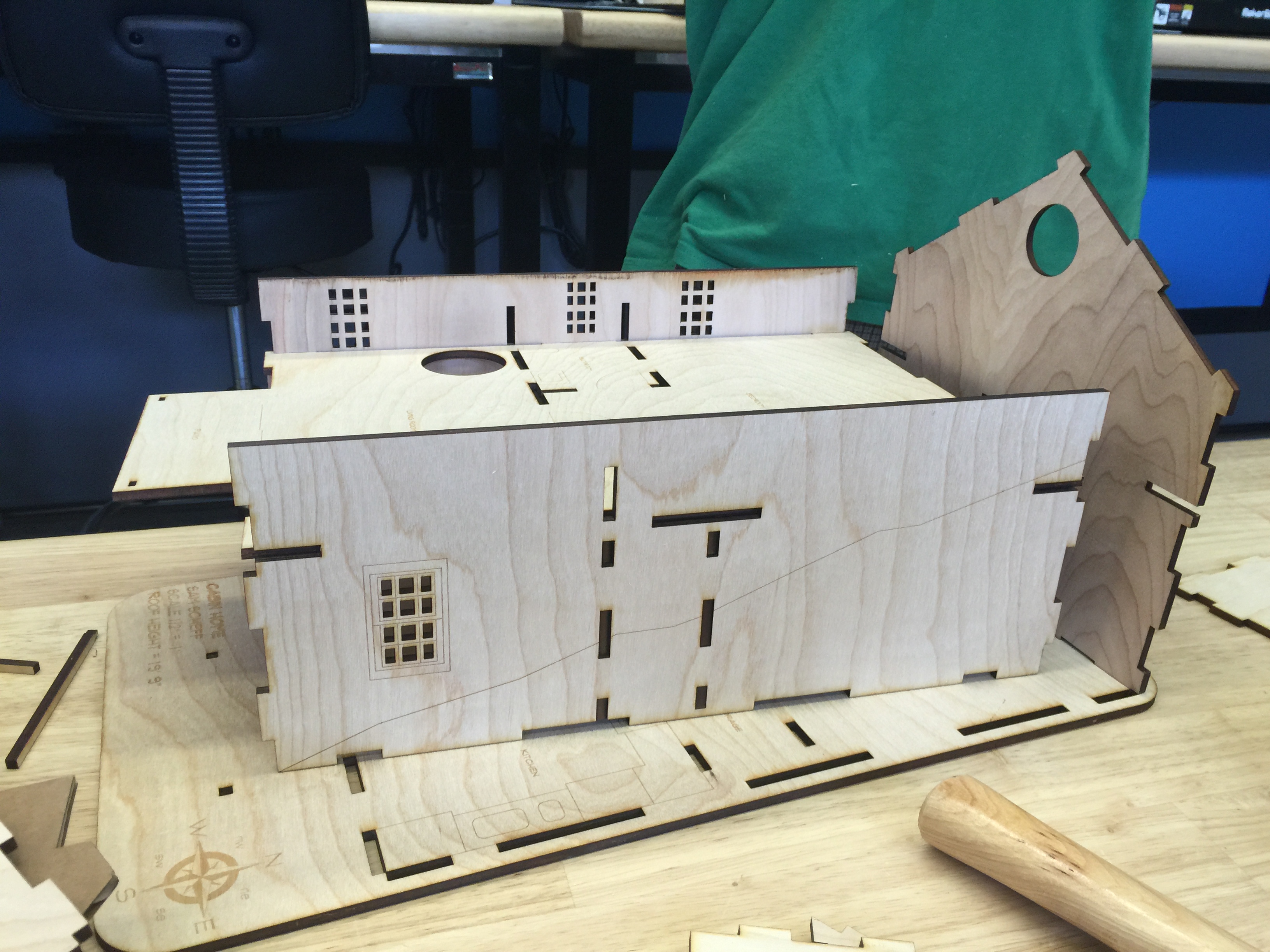 For drafting class I designed a ski cabin. Usually for the class we make the 3D model by using exacto blades to cut foam board but since we have the laser cutter in the Idea Center I decided to cut mine out of plywood. It was really tough to fit it all together but it was really cool when it was done.